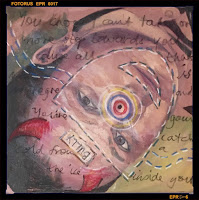 As a young, shy, schoolgirl, I was often bullied. Yes, I was different from most other children, and in those days any kind of different wasn't as acceptable as it is today. Don't get me wrong, I am not looking for sympathy, it really helped me become the strong, independent woman I am today. But the worst for me, was being bullied by my math teacher.

She was a young, attractive married woman, who - according to school gossip - could not have children. I was eleven years old at the time, and had no comprehension for what that could mean to a woman, or how hard life as an adult could be sometimes. All I knew and understood, was that she was a horrible, mean-hearted, unsympathetic, cruel monster, that made my life a living hell at the time.

After I left primary school, I still carried this deep rooted hatred and resentment towards that woman. As I grew older and stronger, I sometimes wished I could bump into her one day and tell her what a terrible person she is, hoping it would make me feel better. As petty as it might seem now, she really treated me badly and that made quite an impression and obvious scar on my young mind. However, I never heard of her or saw her again through the rest of my school lifetime.

Fast forward thirty years later, one day out of the blue I finally bumped into her at a grocery store of all places. I froze in my adult tracks, and felt eleven again. I had no clever words or any thoughts that came to my rescue at that moment. I wanted to turn around and walk away before she could see me, but I was too late. I turned into an ice pillar. I squirmed as she recognised me and walked towards me. To my surprise she greeted me by name with a genuine warm and friendly smile, clearly unaware of the feelings I have towards her. She complimented me on my achievements she has been keeping track of, and told me how proud she was of the woman I have become. I was stunned beyond words!

Then the strangest thing happened. In that moment, all the hatred and anger I had towards her melted away. Not because I was flattered, I wasn't in the least, but I looked at her and saw her just as an adult for the fist time in my life. There she was, the monster in my head. She looked so pathetic. Insecure. She was still exactly where she was thirty years ago. She did not change or grow at all. She was nothing. I felt overwhelming pity for her. I graciously smiled, thanked her and walked away. I was shocked and stunned that somebody so insignificant, could have poisoned me for all those years.

I sat in my car for a moment and finally smiled. Free. Happy. Thankful. And most of all, yes, proud of who I have become. I have changed, I have grown, therefore I was able to spread my wings and become whoever I chose to become. But I was mostly proud that, in that moment when it mattered, I could find peace, keep my dignity and not say anything I would regret later, moreover, not even wanting to do so.