Once upon a time, I was a little girl who dreamed of far off places, magical castles, daring sword fights and mermaids. It was therefore no surprise then that the first place I wanted to travel to "one day when I'm big” was Disney world. Well, when the time came, it wasn't exactly Disney world, but it was so much better! It was truly the far off place with magical castles and mermaids I always believed existed. I just didn't know it existed in Germany!

I was sixteen when I first went to Europe. Everything was so new and wonderful, that I was completely swept away into this enchanting new world. I have since been back a few times and it is still just as magical as that first encounter I had.
Many people refer to a European holiday as the ABC tour (Another bloody church/castle), but for me, every moment was exciting, as it made my imaginary world come to life right in front of my very eyes!

Germany has so much history, so much intrigue and is engulfed in mystery. There are over 25 000 castles in Germany, because of all the competing principalities in the Middle Ages, so there will be no shortage for you to pick form! These unstable times encouraged the construction of secure and fortified castles in Germany. Some are only ruins, but many of them are well-preserved and open to the public.

I hope this stirs your imagination and interest you to see these grand, overly decorated majestic buildings.

If you want to start seeing the castles in close vicinity from each other, I suggest you start with a boat trip on the Rhine River, or as they call it, a Rheinfahrt. There are hundreds of little castles and ruins along the Rhine, visible from the boat or ferry, and you can hop on and off at whichever castle casts a spell over you.

What I enjoyed most was to see the character of every castle. You can’t help but imagine the people still living there, who they were and what they were like, just by studying their decor and priorities. Some were very sophisticated and had double volume libraries and music rooms. Others were blood thirsty and their castles look like a war zone! They had torture rooms and a nasty welcoming gift at the entrance, where an unwanted guest would receive boiling oil pouring down onto them as they tried to enter!

Even though the Lorelei rock - on the St Goar side of the Rhine River - is not a castle, it is the epitome of fairy tales. I mean, where else can you actually see a 130 meter high cliff on the bend of a beautiful flowing river, with a singing mermaid distracting you and sending you to your death? This is the stuff fairy tales are made of! Because this area is so deep and narrow, it is one of the most dangerous places in the Rhine Valley. Legend has it that many a mariner in their wooden dinghies, met their death when they were intoxicated by the enthralling mermaid’s song, and didn’t see the dangerous bend in the river, shattering their boat to pieces.

Swoosh your magic wand a little further south, and you find the most important Renaissance structure north of the Alps, the romantic Heidelberg Castle. This famous ruin - that was home to a dozen kings, leaders and royalty - is the landmark of the beautiful town of Heidelberg. It was destroyed several times over the centuries by lightning, war and fire, and was partly rebuilt, but you can still make out different architectural styles in the ruins. The Castle never regained its original glory, but the ruins have a rugged charm of their own.

This castle was made even more famous with the operetta and movie “The Student Prince”. Who doesn’t know the "Drinking Song” and "I'll Walk with God" - one of my personal favourites, superbly sung by Mario Lanza. In recent years, the operetta is being performed each summer at the Heidelberg Castle Festival.

The main attraction to this castle is possibly the impressive wine cellar. It houses the biggest barrel in the world, holding 55,345 gallons of wine! In former times, the wine growers had to pay their share of taxes by delivering wine to the castle.

There was also a memorial tablet unveiled for Goethe in 1961 - one of Germany's greatest poets. Legend has it that Mark Twain visited the Castle of Heidelberg and during a boat trip on the nearby river Neckar, was inspired to write Huckleberry Finn.

The gardens are a work of art on their own, where you will also find the remains of the "Great Grotto". Rocks were blown up to create this romantic grotto, displaying musical water arts. The walls were abundantly decorated with rare polished stones, shells and corals. Left of the grotto is a pond that contains the famous, and enormous, sandstone sculpture of a resting "Father Rhine".


But by far, the most impressive castles I ever saw were the ones build by King Ludwig 2. They are so grand, majestic, over life-sized and intricate, that you expect a flame blowing dragon to jump out behind every corner you take! His postcard-perfect Neuschwanstein was my favourite, and I saw first-hand just how big, dramatic, and over the top a real life fairy-tale castle could be.  It is so beautiful, the castle immediately casts a spell on you forever!  Ludwig's extravagance and romanticism earned him the title of the “Fairy-tale King”. The other two I would like to mention is Herrenchiemsee, his dream escape, and Linderhof, his final retreat.

Before I can go into detail on the castles, you first need to understand this enigmatic dreamer, who had the most amazing visions for all his buildings.

Ludwig was only 19 when he became king of Bavaria in 1864. Rather than live with the frustrations of a modern constitution, he spent his years lost in Romantic literature and operas. He was a devoted patron of the composer Richard Wagner and was enthralled by Wagner's opera and the rich German mythology which the music was based upon. Wagner and Ludwig had, in many respects, a synergistic relationship. Wagner acted as a muse for inspiration of his castles and theatrical projects.

Ludwig began to lose himself in the fantasy worlds depicted in the operas and even started dressing as some of the operatic characters. He started to sleep in the day and only venture out at midnight in the snow on a horse drawn sleigh, until the dawn breaks again. (How much more romantic can your life get!)

He was seen as a handsome, kind and generous young man by his subjects, but by 1886 - fed up with his extravagances - the royal commissioners declared him mentally unfit to rule Bavaria. Unfortunately there was no "happily ever after" for this king. Days later, he was found dead in a lake under very mysterious conditions. People still debate whether it was murder or suicide.

Linderhof is set in the woods just fifteen minutes away from Oberammergau. Surrounded by fountains and sculpted, Italian-style gardens, this is the homiest and smallest of Ludwig’s castles.

The building was designed in the style of the second rococo-period. Although Linderhof is much smaller than Versailles, it is evident that the palace of the French Sun-King Louis XIV (who was an idol for Ludwig) was its inspiration. The symbol of the sun that can be found everywhere in the decoration of the rooms. The staircase, for example, is a reduction of the famous Ambassador's staircase in Versailles, which would be copied in full in Herrenchiemsee.

Ludwig lived much of his last eight years at Linderhof, inhabiting a private fantasy world, where his lavishness knew no bounds. He lived as a royal hermit and enjoyed his own company. His dinner table - pre-set with dishes and food - rose from the kitchen below into his dining room, so he could eat alone. This could be right out of a scene in Disney's Beauty and the Beast.

The palace also has an exquisite, quaint grotto, which served as a private theater for the reclusive king to enjoy his beloved Wagnerian operas. He was usually the sole member of the audience. The grotto features a waterfall, fake stalactites, murals and a swan boat floating on an artificial lake. Quite a spectacular sight to see. 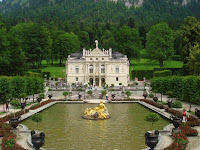 The palace of Herrenchiemsee was built upon an island floating in Germany's largest inland lake - a perfect little spot to assure the eccentric King's privacy. The entire spot was designed to emulate the sharp-lined majesty of Versailles, and elaborate French paintings were hung in it’s flawlessly finished, furnished rooms. There is so much opulence, it looks like a magic wand was swept over the whole place, turning everything into gold (literally)!

The formal gardens are filled with fountains, and the statues - reminiscent of classical antiquity - are found throughout the gardens, overwrought in the grand style of romantic operas.

High on a hill, against an Alpine background in Bavaria, lies the most famous fantasy castle in the world: Neuschwanstein - Ludwig's private summer retreat.

It was constructed on a hilltop not for defence, but for the spectacular view. If you think it looks like something straight out of a Disney fairytale, you are quite right. The Disney castle was modelled on this specific castle.  The design of Neuschwanstein is medieval, but Ludwig made sure to build in modern technologies of the day, such as flush toilets and heating. With towering turrets in a striking setting, this castle is a huge hit with sightseers. This castle, which is about as old as the Eiffel Tower, is a textbook example of 19th-century Romanticism.

The lavish interior, covered with damsels in distress, dragons and knights in gleaming armour, is so enchanting and showcases the heroes and legends which inspired young Ludwig in decorating his fanciful castles.

His castles was taken over by the state, and since his death over 60 million people have visited Neuschwanstein alone! They get up to 6000 visitors per day in the summer.

With such a rich history and so many sights to choose from in Germany, you can plan the most fantastic fantasy holiday ever! Next year I am taking my husband there, to share some of my magical childhood memories, and maybe we can even catch a magic spell or two while we’re at it!

I truly hope this inspires you to look at castles in a new light in future, recalling the magic of those who once dwell in those halls, long long ago...

Some day you will be old enough to start reading fairy tales again. C.S. Lewis