The Joy of Mail Order 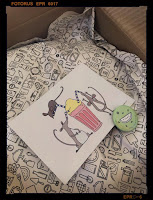 I love the thrill of online shopping! Or to be more specific, not the shopping part, but the anticipation of the package delivery.

I started doing online shopping while I was building my house, scouring the internet for all new, unique and beautiful things. Every time I discovered a gem, and sometimes even a practical item - I ordered it.

Obviously things got a little out of control, which resulted in me starting to receive various boxes of deliveries on an almost daily basis, for weeks on end!

Every time the doorbell rang with a new parcel delivery, I got a fluttering in my tummy and I could barely contain my excitement, just like Christmas Eve when I was a child. The best part is that you have absolutely no idea what it could be when it arrives, because I have ordered so many things from so many different places, that it is truly a surprise, and a good one, because this gift was chosen by yourself to yourself - no disappointment ever!

Of course there's some post-purchase-blues after certain deliveries, but that could be the shopping that was done after midnight with the assistance of a bottle of wine...

A month ago a very good friend of mine had a back operation, so I flew down to stay with him for a while and help out where I can. He is usually very independent, busy and in control, so being bed-ridden for a week or two was pure torture for him. We set him up nicely in bed with his TV,  ipad,  wi-fi,  mini bar and room service bell, all in place to make his suffering more tolerable (for him or me?)

The first night however, he had so much pain that he could barely sleep, so he surfed the internet, looking at some items he might be interested in. The next morning he was so excited to see me, because he had made up a foot long list of things he saw, and where I can go buy or collect it for him. So off I went, shopping for his midnight wish list items.

The next day it was the same story, but his list grew exponentially everyday, until at the end of the week he had a new fireplace installed, new paintings hung, a wonderful new sound system and a vintage record player (which included seven trips across town for me to look for old records), to name but a few.

I jokingly said to him that I don't think that he exactly understands the concept of online shopping. It does not involve me spending a whole week running around with his credit card looking for things he saw online in real life, and texting him pictures to and fro to make sure he is happy. I was completely exhausted!

It was then that I decided to introduce him to my latest favourite shopping site, which for him was a first time experience in online shopping. Boy oh boy, did I create a monster! He became totally possessed. He spent three days and two nights sifting through thousands of products (from engine parts to clothing), placing numerous orders in between, and discovering a whole new world out there!

The first delivery arrived two days later already, complete with hand written thank you note and all. Skeptic that he is, he fine combed the package and invoice, but I couldn't help but notice the smile on his mouth and excitement in his body language. It was so much fun for me seeing his resistance crumble as each package arrived, despite him telling me how he miss walking through the hardware store on a Saturday morning looking for interesting things.

I just look at him and smile, because I know better. Despite his complaints and utter denial, he is now just as hooked on online shopping as I am, if not worse...