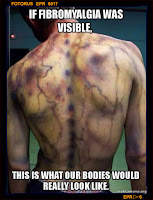 I woke up one morning and literally just could not get out of bed. I was in so much pain that I couldn't move at all and tears streamed down my face without me even crying. It was then that I realised that my chronic inflammation might not be inflammation at all.

It didn't happen overnight though. A year ago I had serious reconstructive surgery on my hand after a mountain bike accident and it took six months' physio until I was able to use my hand again, so pain was just an everyday occurrence which didn't really bother me, since I have a very high pain threshold.

But as time went by, the pain became worse and spread through my entire body. My muscles and joints were hurting and getting stiff, in the mornings I battled to stand up straight, and I was constantly exhausted. Every time went I went hiking or exercised, I was wiped out for a few days with - according to the doctors - inflammation and bursitis. I was given anti-inflammatory medication at first, and when it got worse, various types of cortisone, but nothing took the pain away.

Over the past year I have been to so many doctors, specialists, homeopaths and whatever else you can think of, in search of answers to my symptoms. I know my body very well, and I knew that there was something seriously wrong. It bothered me that I wasn't progressively getting better or worse, but rather have very good and very bad days randomly. I feared that people might think I am being a hypochondriac and friends couldn't understand if I had to cancel plans just because I was too exhausted to get up. Unwilling to accept this inexplainable illness and the feeble excuses I got, I kept on researching until I could find some answers that would make sense, until I was recently diagnosed with fibromyalgia.

And then it all made sense.

Fibromyalgia is a complex chronic pain disorder causing widespread pain, fatigue and other types of discomfort, and vary in intensity and symptoms from person to person. Common symptoms include cognitive difficulties, joint pain, brain fog, depression or anxiety, migraines, pelvic pain, cysts, irritable bowel syndrome, light or sound irritability, deteriorating eyesight and insomnia to name a few. Fibromyalgia patients often lack the restorative levels of deep, non-REM sleep. It is during these deepest levels of sleep that the body restores and refreshes itself, and that is why insomnia is such a big problem. 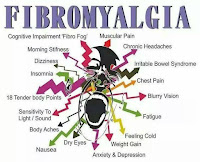 Unfortunately it is often difficult to get a  diagnosis, because of the variety of symptoms and lack of understanding about the disease, therefore misdiagnosis is a common problem. None of this pain will show up on an x-ray or blood test. That’s one reason why getting a diagnosis may take so long, in fact, it takes an average of two to four years to get an accurate diagnosis.

The most common test is to check for 18 tender points on the body when it comes to diagnosing fibromyalgia. The College of Rheumatology guidelines suggest that people with fibromyalgia have pain in at least 11 of these tender points when a doctor applies a certain amount of pressure. Approximately 10 million Americans (according to NFA) suffer from this illness.

Fibromyalgia can be hereditary, but can also be triggered by a traumatic event in your life, such as a car accident, repetitive injuries, rheumatoid arthritis or other auto-immune diseases, and the way our genes regulate how we process painful stimuli. There is no cure for fibromyalgia, but medications, exercise, acupuncture, and behavioural therapy can help relieve and manage the symptoms.

I am certainly no expert, and can only write about my personal experience, since it affects everybody in a different way. I am generally extremely healthy and energetic, but the pain and exhaustion has slowed me down a bit. Since I am an artist, I had to put more effort into finishing a drawing, with the pain in my hands and back. I love hiking, so I just started taking easier trails and maybe less often. I hate yoga, but find that stretching really helps with my mobility. I go for regular acupuncture sessions and a long bath in epsom salts does wonders!

The most common reaction to this illness is that people don't believe or understand you. Just because you don't look sick, doesn't mean you aren't putting in every effort to carry out your daily tasks. 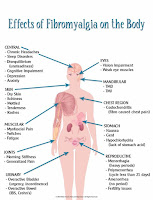 Years ago I knew someone who was in a serious car accident, and after recovering from his injuries, he still had chronic pain. For two years he went from doctor to doctor, telling them about his debilitating pain, but all the tests they did were negative and they concluded that it was psychological and not real. His suicide note stated that he was sorry to do this, but that it became unbearable to live with the pain, and even worse that everybody thought he was just imagining it. My heart broke for him. Now, years later, I am wondering if it was really just in his head, or whether he was suffering from fibromyalgia?

So therefore I am writing about this to create a bit more awareness of this menacing illness, of which I was also not aware of before. I am hoping that it can shed some light on a very serious and unknown condition, and maybe give hope to someone in the process. I still have a lot to learn, but am very lucky to have been diagnosed so early on.